My dear, sweet husband, Richard, died yesterday (January 25, 2012) at 11:00am.  I could drive a truck through the hole in my heart.  I wonder why I am happy to see him free of the prison created by LBD and an overwhelming need to pull him back.  He is gone from my sight but never from my heart.  I love you, Richard.
Posted by Unknown at 7:40 PM 4 comments:

Making the Most of Time

I have found what I believe will be a wonderful caregiver to come in 8 hours a day.  Another young woman will come between 8:00 and 9:00 pm to help me get RD into bed.  What a relief to finally have help in the house.  I was reaching my physical limit in transferring and moving RD.  With stress reduced in caring for him, I know the time ahead will be more focused and pleasant for both of us.  "Quality time" is a tired phrase but maybe it will have meaning for the two of us going forward.
Having someone in the house for 8 hours/day will be an adjustment but the positive outweighs the negative.  The real test won't be whether I can adjust, it will be whether RD can tolerate it.  He has always been a private, work alone, solitary man.  A social butterfly he is not.  LBD hasn't changed the core of him.  He prefers life as a twosome. 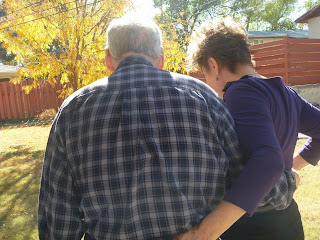 A friend is having a birthday tomorrow so I've baked a cake tonight.  Just doing routine things like that make me feel part of the 'real world'.  Because I have a new caregiver coming, I will even get to meet up with our group of friends to celebrate. Sounds wonderful and is making me smile.
Posted by Unknown at 6:23 PM 1 comment:

This one is difficult.   On January 8th, RD slept all day without waking.  This continued on into Monday, the 9th.  No food, no water.  I could not wake him.   Planning to call the doctor on Tuesday morning, I went to check on him and he was wide awake.  After cleaning and bathing, he was lively and energetic all day.  He ate like a horse and drank and drank and drank some more.  Late Tuesday evening he fell.  I called an ambulance because he was complaining of pain in his leg and hip.  Six hours later we found ourselves in a hospital room, not because anything was broken nor had he been injured but because his blood pressure was sky high.  It was to be a 48 observation admission.  At some point early Wednesday morning,  RD fell back into his deep sleep from which he could not be awakened. He stayed in a coma-like event until Thursday afternoon.  He was back into the deep sleep on Friday. There was no way to arouse him from this sleep.  A Home Health Care worker came to the house and panicked when seeing RD.  She called his doctor and described RD's condition, apparently, telling the doctor she didn't think RD would live through the weekend.  This triggered a major assessment of RD in the hospital.  His lab work looked great.  No problems with blood, UA, pulse, etc.  His blood pressure was remaining high so another observation.
RD was furious to find himself in the hospital again. He told me, "I was in a peaceful, happy coma and you made me wake up".  Friday evening, after the second admittance of the week, RD's primary care physician, called me into a tiny space to talk about RD's prognosis and condition.  He explained the signs of end-of-life and felt RD was meeting the criteria. He calmly told me it would be about 1 month.  I'm ashamed of my juvenile response - "You're kidding me!".
I've no doubt I'm in some state of denial.  I don't really believe the physician is right on this one.  What is shocking to them is more routine to me (long periods of sleep without waking). Agonizingly,  I have contacted Hospice and they have made their first visit. Time will reveal her plan soon enough.
Love to all who read this note.
Jo Ann
Posted by Unknown at 9:49 PM No comments:

Change, Change, and One More Change

Things they are a changin. New and frightening changes.  Last Tuesday began as any day might.  Routine and familiar.  Around lunchtime we moved to the kitchen area and were sitting quietly, watching the street activity.  Suddenly, without provocation or cause, RD began to stomp on my foot.  He kicked me between the legs, grabbed my arms and twisted. The look on his face was something out of a movie scene.
The following day we are sitting in his doctor's office.  Tears roll down my cheeks as I describe my husband's behavior.  Why do I feel embarrassed and bewildered at the same time?  I have NO skills in managing this behavior and it came out of nowhere.  I don't know if it's a one time event or a new and permanent behavior.
RD's doctor listens (as he always does) and prescribes an antipsychotic medication.  Just hearing the word "antipsychotic" knocks me for a loop.  A very scary word, this is.
After we arrive home, I go to the computer in search of more information about the drug prescribed.  I don't feel comfortable with what I'm reading.  Information is not the same as knowledge.  I can get endless information from computer searches but I obviously lack "knowledge" about medications.  I am neither a pharmacist nor connected in any way to the medical field.  Recognizing the frustration a medical professional must feel when patients or family members try second guessing his/her decision, I approach the doctor with some dread.  Will he brush me off, get exasperated with the 'butting in"?  It turns out, he welcomes my questions and concerns and is willing to prescribe the medication I request.  I'm SO happy he's open to the possibility of sharing information and decision-making.
It's been a mere three days since I've started the new medication but already I can see changes and all are positive. This will sustain us until we need to make another change.
Been there,
P. Jo Ann.
Posted by Unknown at 9:19 PM 1 comment: